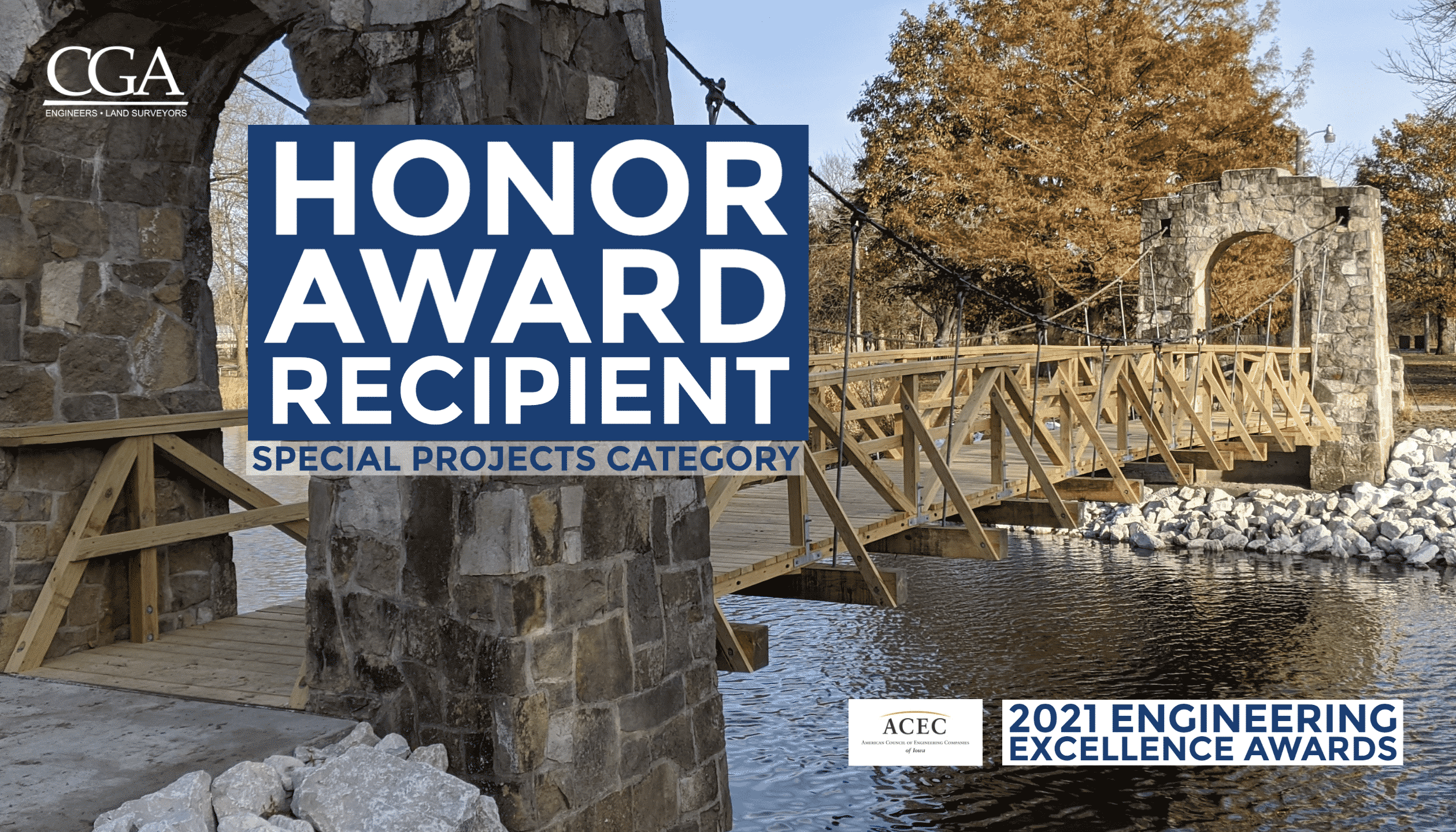 The Story City Historic Swinging Bridge was built by Franklin D. Roosevelt’s administration in 1936.  This charming historical mark within the City of Story City was built as part of the Works Project Administration in an effort to add to the aesthetic of the town, as well as provide jobs to an underemployed populace reeling from the effects of the Great Depression. Preserving such a historic bridge was important to the client and the entire community, and the CGA engineering team stepped up to the challenge.

In the spring of 2019, a late thaw coupled with heavy rainfall inundated the South Skunk River with amounts of water that sent it well above the banks.  In addition, because of the late thaw, river ice and other debris were sent down the river and thus collided with the bridge.  Extensive damage was sustained by the structure, making it unsafe for any use whatsoever until the failure within the structure was remedied.

CGA examined the original bridge design and worked with the owner to redesign a new structure that was true to the original yet incorporated improvements to mitigate future damage from natural disasters.

Because of the abnormally high water levels, an exhaustive observation of the deck joists was unable to be completed, however, the general condition was able to be attained.  In the areas immediately beside each bridge tower, the deck joists were totally destroyed, making safe access to the structure impossible.

In addition, the original beams were not of a grade of lumber where a structural evaluation of their adequacy may be calculated.  The geometry made for problematic connection to both the steel hangars as well as the walkway joists.  The CGA team recommended that the entirety of these beams be replaced with lumber with a structural grade, treatment, and geometry to properly accommodate the structural components of the bridge.

Wooden pedestrian suspension bridges are unique. Most public pedestrian bridges these days are prefabricated steel structures and not stick-built on-site from wood. CGA examined the original wooden structure and identified the primary areas of failure. We then designed a new structure that added safeguards to these areas as well as bringing the structural elements to within code. We incorporated custom steel end caps onto the beams to protect the softwood material from damage due to ice and debris impacts during high water events.

In addition, the design incorporated recessing the down-rod bolts into the beams to prevent this:

We are pleased to receive a 2021 Honor Award from the American Council of Engineering Companies of Iowa for our involvement in this project.